Round Stamp – Design yourself online

Round stamps have a long tradition. They are used for example by authorities and experts and therefore have a very special charisma. They look noble, serious and extraordinary. Use this effect for your success! Our shop offers you a unique online editor, with which you can easily design your personal round stamp. Attention is guaranteed! 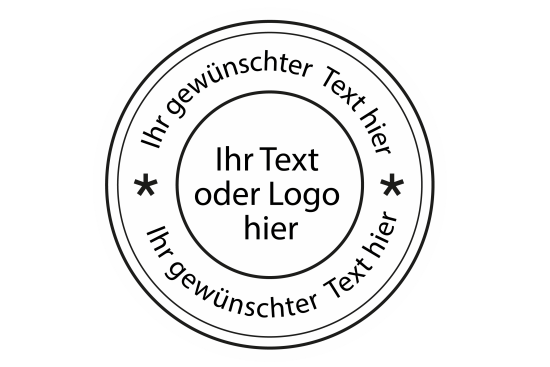 Design round stamps yourself

With our online editor you can easily edit a round stamp online. Choose one of our numerous templates and easily adapt them to your wishes. Of course you can also insert a logo or graphic on a round stamp.

Alternatively, you can also upload a ready-made graphic as a PDF or EPS.

Our online shop is unique. Only here you can design round stamps online. Or you can upload a finished graphic to order your round stamp. We manufacture most round stamps within one working day. Your desired postmark can be in your mailbox tomorrow. Best you order right now. 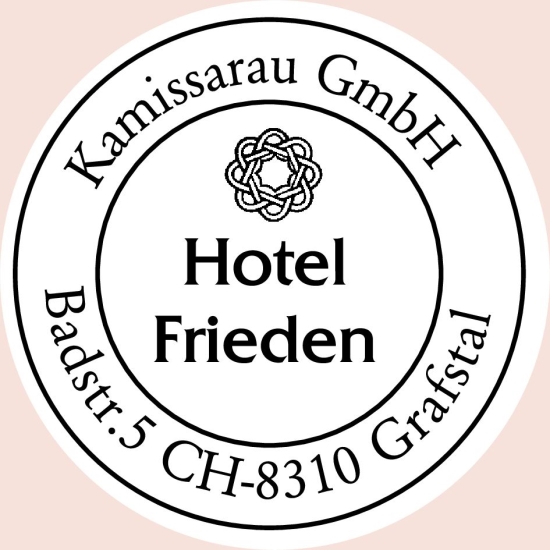 I create my round stamps at arial.ch. Where else?

I have often ordered round stamps here. Why? Because this always works smoothly, because the price is right and because it is the only online shop that can do this.

I am completely satisfied with the round stamps from arial.ch

In our company we need many round stamps for our contracts. We have found what we were looking for at arial.ch. Machining is easy, delivery is fast and the quality is excellent.

Round stamps – Draw all eyes to you!

A round stamp sticks out! Especially if you take advantage of our wide range of design options when designing: For example, add your logo or a personal image that you can easily upload. Combined with a round set text, your stamp becomes an eye-catcher in no time at all!

Back Forward
Click below to «Round Stamp» select the template that is closest to your desired stamp. In the online editor, you can then customize the text and change the font size and style. You can also upload an additional graphic. Afterwards you can «Round Stamp» order it. Nothing suitable? We would be happy to create a template for you. Write to our customer service.

114 Templates for selection – Round Stamp 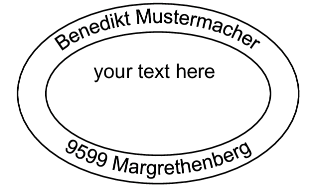 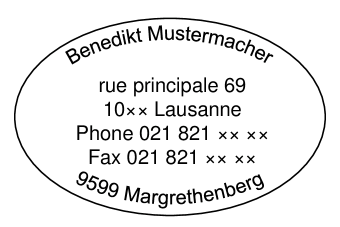 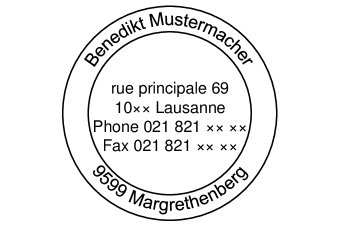 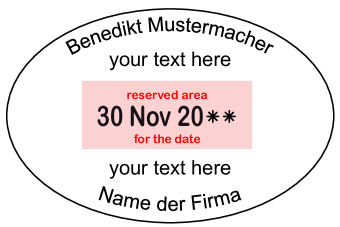 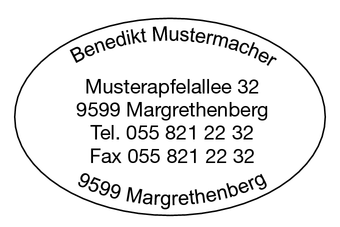 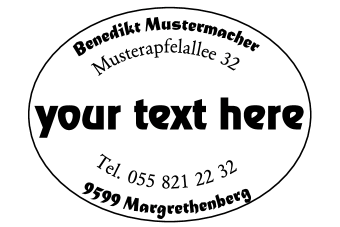 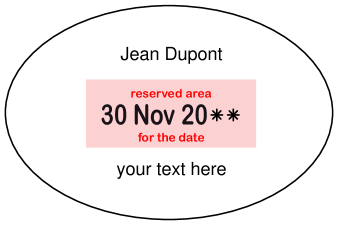 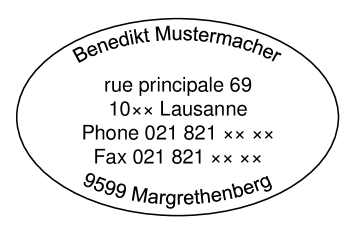 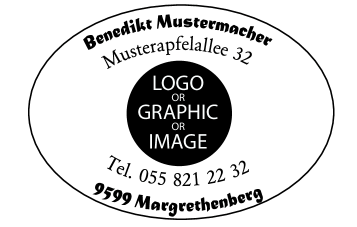 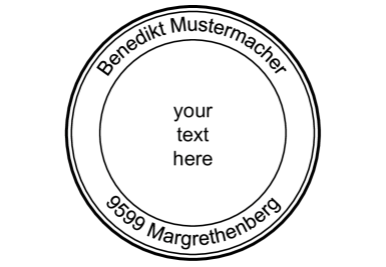 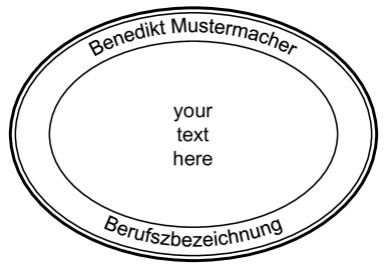 Select this option if you have a finished graphic file or if you want to use the template «Round Stamp» in Word, Excel or PowerPoint. You can upload the following formats: EPS, PDF, PSD, DOC, XLS, PPT We also provide files in the correct format for the «Round Stamp» most common programs. You can download them, edit them on your computer and then upload them again in the next step.

We take care of everything: We will gladly design an individual template in the size from to «Round Stamp» for you. Just send us what you have: Text – Logo – Image – a document – Possibly a photo of the imprint of the old stamp. Our customer service will then take care of the rest. You will receive a design suggestion for the «Round Stamp». Only when you give your OK, we produce the «Round Stamp».

Yes, you can. We are the only online shop to offer a comprehensive toolbox for designing round stamps. You can also generate round lines and position your text on such a line. Additionally, you can place your logo or a graphic in the middle of the round stamp, which you can easily upload. There is a video about this process in the online help.

Yeah, that's no problem. You have two possibilities to order a round stamp with PDF:

There is a video about this process in the online help.

We can produce round stamps of all models. The Trodat Printy, Trodat Professional, Colop Printer and Colop EOS have special round housings for this purpose. If a round wooden stamp is desired, we mount the round impression on a square handle.
Yes, we can make that for you. We mount the round imprint on a square stamp handle in each case. So do not look for round handles, but choose a square wooden stamp for your desired round stamp. We offer different sizes from 10×10mm to 100×100mm.
Round stamps look very "official". This is probably due to the fact that documents were already sealed and authenticated earlier with round Sigel stamps. However, anyone can have round stamps made for their personal or business use. Such round stamps simply must not misleadingly pretend that they are an impression of a stamp of an authority.

Round Stamp – 9 Examples of orders

In the middle of a round stamp the new logo is shown to its best advantage! 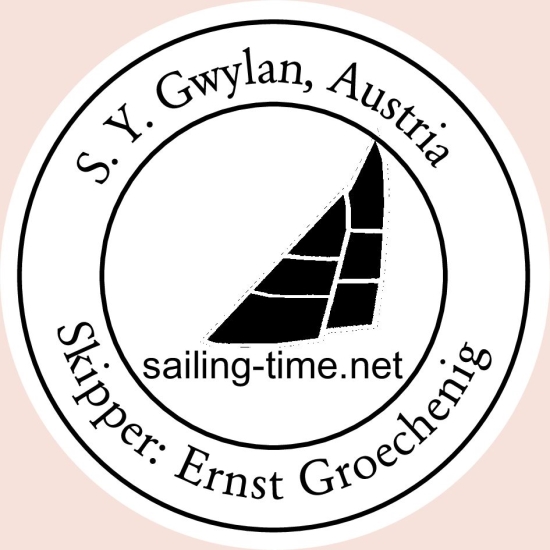 Round stamps are a very special eye-catcher, especially if they frame your personal logo. Be inspired by our numerous design possibilities! 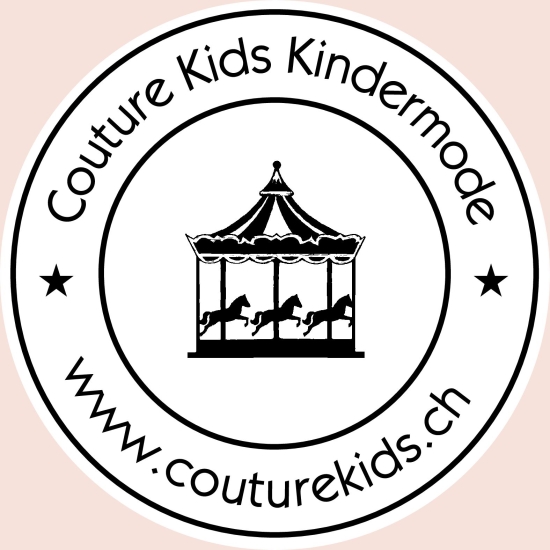 A successful logo stamp, the text is in a stylish roundel.

A beautiful wedding stamp with which the wedding date can be announced early. 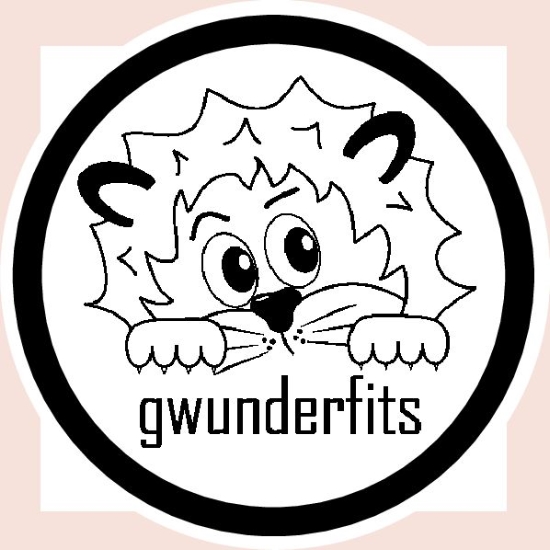 A very cute logo, super suitable for a round stamp! 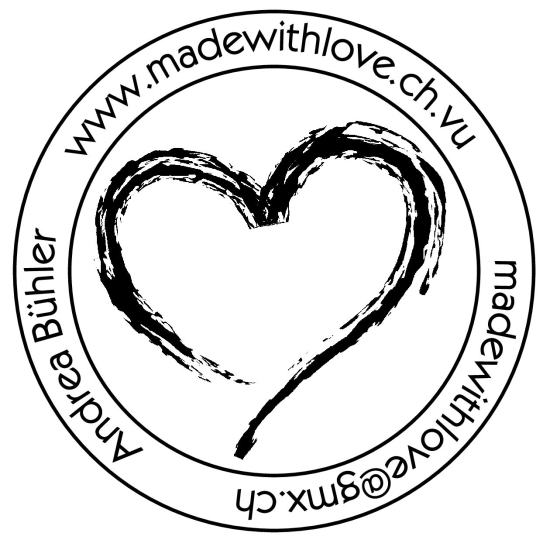 The circle around the heart consists of several circles, the texts were moved to the right place with the angle indications. Thus a beautiful, concise stamp was created!

A beautiful address stamp, in the middle refined with an ornament from our large symbol catalogue. The chosen font fits perfectly and gives the design impetus.

This design was uploaded as a complete graphic. The fine lines require special attention, which is why the customer chose a model of the Colop Flash EOS stamp line. With these stamp models, even the most complex impressions can be made with precision and accuracy. 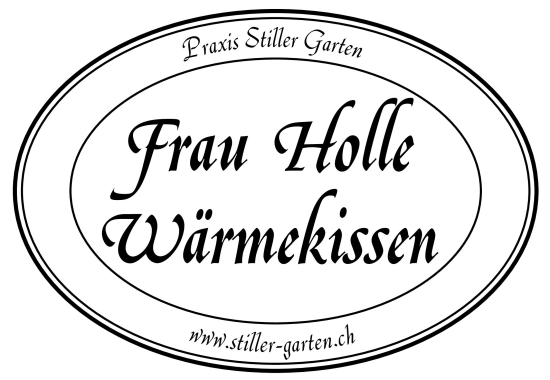 Even oval designs are possible with our round set generator. The middle text is wonderfully highlighted by the ellipse.

Round Stamp – More about this topic

Round stamps are - as the name already suggests - round in shape and are mostly used in public authorities as official seals. It is not uncommon to find on the inner edge of these round stamps. Also, symbols like the German eagles or the lion - for example in Hesse - within the Round stamp recognizable.

Application of round stamps

For example, in law firms, at court or other public Institutes authenticate documents with such round stamps. On every pass, each driving licence and other document has a round stamp Publicly appointed experts - such as Bailiffs - carry special round stamps. Also the post office stamps their letters and parcels with round stamps on which both the place of the post office and the date.

Various professional groups, such as tax consultants and tax agents, even get the round stamp both in their form and their design as a professional stamp is also required by law.

The imitation of public, official round stamps - even the approximate Imitation - is punishable by law. However, any private person can obtain a round stamp provided that it does not bear any similarity to the above-mentioned has to show official seals. Very popular with private persons - mostly funny - motive stamps. In the business area, the round stamps are often found Application as logo stamp. The majority of the so-called dipping stamps are also round. In addition to a typical motif, they usually bear the name of the owner, a funny saying or the company name in their stamp. They are used - apart from advertising purposes - primarily for the registration in the logbooks kept by association divers or diving instructors have to.

Round stamps can be used by private persons as well as business people - similar to the other stamps - both directly in the specialized trade and online with us order. Especially the individual design via the Internet is very important for the simple, convenient and easy to do from home. The decision as to where and how one would like to acquire its desired round stamp for sale is thus also depends on the time as well as on the respective location. Considerably more time-saving and it should be more convenient to order online via the Internet, because you are neither bound by shop opening hours nor by long journeys. The present technology enables and guarantees us and you a real and effective individual design, a good customer service and high quality finding.

Especially the round shape is what many of the users as well as viewers is particularly appealing. Round is synonymous with harmony, and which of us would be not in need of harmony or even -addicted? For example, you can also find in numerous children's games or educational learning and stamp games the form the round stamp again.